Home » About Us » Racism and Social Justice

Children’s Institute is committed to work towards the elimination of systemic and institutional racism, individual racism, and implicit bias. We don't stand silent. Silent isn't neutral. We stand and speak for racial justice and public health equity – together. Families with children in communities of color demand allies who support, understand, recognize, and transform personal discomfort into decisive action that promotes lasting change around these inequities. Continue reading

How Has the Pandemic Exposed Structural Racism

Children’s Institute’s Racial Equity and Justice Institute (REJI) team humbly offers this detailed, evolving, and far from exhaustive public account of the vastly disproportionate health, economic and educational fallout on communities and people of color—nationally and locally— revealed during the Covid-19 pandemic. Presented in slide deck form, this report captures data that:

Our goal is to provide a resource for awareness and action. We invite you to join with Children’s Institute in collective impact efforts and as we stand with communities of color in tangible ways to support equity of access and wellbeing among all children and families.

How Has the Pandemic Exposed Structural Racism 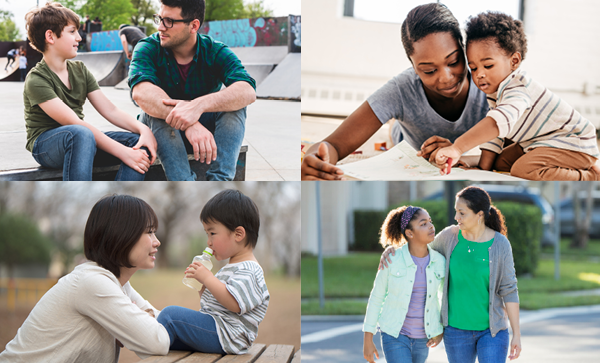 Talking to Children and Youth about Racism and Associated Violence

Heinous acts of racism caught on camera as well as the recent deaths of unarmed black persons – including Ahmaud Arbery, Breonna Taylor, and George Floyd – by current or former law enforcement officers have shaken the country. While to some it may appear as though racist acts have proliferated as of late, persons of color know differently: the racism that has always been there is being captured in ways not possible prior to the past decade. As the actor, Will Smith, has said, “Racism is not getting worse, it’s getting filmed.” Continue reading

Talking about Racism with Children

PBS Teachers Lounge: 10 Tips on Talking to Kids About Race and Racism

NCTSN: Addressing Race and Trauma in the Classroom: A Resource for Educators

NCTSN: Talking to Children about Hate Crimes and Anti-Semitism

Embrace Race: 10 Tips for Teaching and Talking to Kids About Race English; Spanish

Chalkbeat: ‘Moments Like Now are why We Teach’: Educators Tackle Tough Conversations About Race and Violence-This Time Virtually

Charis Books: Books to Teach White Children and Teens how to Undo Racism and White Supremacy

Pretty Good: Your Kids Aren't Too Young to Talk About Race: Resource Roundup

Zero to Three: Racism and Violence: Using Your Power as a Parent to Support Children Aged Two to Five

Today: How to Talk to Kids About Racism, Protests and Injustice

Child Mind Institute: Racism and Violence: How to Help Kids Handle the News

Community Playthings: The Way Forward: Responding to Racism in ECE Programs and Schools

PBS Kids: How to Talk Honestly With Children About Racism

Moving Past The Silence: A Tool For Negotiating Reflective Conversations About Race

Racism as a Public Health Crisis

American Journal of Public Health: We’re Not All in This Together: On COVID-19, Intersectionality, and Structural Inequality

WHEC TV: Rochester In Focus: UR Medicine Clinical Psychologist on the Effects of Racism on Kids and Teens

Anti-Racism is a Core Component of SEL

Teaching Tolerance: Responding to Hate and Bias at School

ASCD: How to Be an Antiracist Educator

We are Teachers: 21 Anti-Racism Videos To Share With Kids

The Atlantic: What Anti-racist Teachers Do Differently

Communities for Just Schools Fund: When SEL is Used as Another Form of Policing

Resources from Our Partners

Anti-Racism is a Core Component of Social Emotional Learning

Talking to Children and Youth about Racism and Associated Violence

Join us and others in our community to simply listen, support and connect. The Virtual Community Connection is a series of virtual community discussions intended to foster human connection and  inform our anticipation of needs as we navigate an unprecedented time.