Home » About Us » Blog » A Note from Elizabeth - Reflections, Recommended Reading, and Finding SEL Role Models

A colleague recently gave me a copy of Justice Sonia Sotomayor’s new book My Beloved World after seeing her inducted into the National Women’s Hall of Fame in September.  I’m not generally a big fan of memoirs but thought that it would be interesting to read her story and better understand the path one takes to become a justice of the Supreme Court.  As a woman, I expected to be inspired by Sotomayor’s story of getting to the top of her male-dominated field – and I was.  What I did not expect, was to be inspired about and be able to make connections to my work.

But as I read, I found myself marking passage after passage that eloquently illustrated the ultimate point of social and emotional learning – shaping the adults who are leading our world, whether by determining laws, educating children, running businesses, or serving coffee.  For example, in one section she describes how, one day in her neighborhood in the Bronx, she witnessed a cop taking a bribe from a fruit vendor in exchange for allowing him to keep selling his fruit without a permit.  And another time where she saw her aunt and some friends making nasty crank calls in order to have a few laughs.  Sotomayor writes:

“How do things break down?... I couldn’t understand how someone could be so pointlessly cruel – so arbitrarily, pointlessly cruel. What was the pleasure in it?... How could [my aunt] not imagine?...How could the cop not imagine what two large shopping bags full of fruit might measure in a poor vendor’s life, maybe a whole day’s earnings? Was it so hard to see himself in the other man’s shoes? I was fifteen years old when I understood how it is that things break down: people can’t imagine someone else’s point of view.” 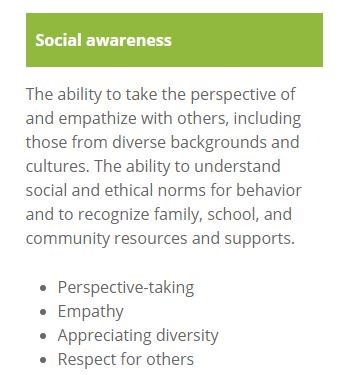 One of the five core social and emotional competencies laid out by the Collaborative for Academic, Social, and Emotional Learning (CASEL) is social awareness.  Perspective-taking, empathy, and respect for others are key components of social awareness. It is something like the golden rule on steroids – not just treating others how you want to be treated (although that’s a start), but actually jumping into their shoes and treating them how they want to be treated.

In another example, she talks about protests that were happening on campus at Yale where she went to law school. She writes:

“Being a rabble-rouser did not appeal to me. Not that I didn’t care passionately about the group’s causes; rather, I had my doubts that linking arms, chanting slogans, hanging effigies, and shouting at passersby were always the most effective tactics…if you shout too loudly and too often, people tend to cover their ears…A respectful dialogue with one’s opponents almost invariably goes further than a harangue outside his or her window. If you want to change someone’s mind, you must understand what need shapes his or her opinion. To prevail, you must first listen.” 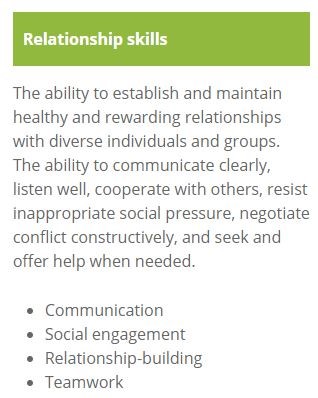 As someone who doesn’t tend to engage in marches and protests despite my passionate beliefs, perhaps I was partly just relieved to have my approach validated.  But I was also struck by how, once again, Sotomayor hit the nail on the head with one of the core social and emotional competencies – relationship skills.  A key part of having effective relationships, whether with a loved one, friend, or rival, is listening and identifying ways to solve problems constructively.

I guess what inspired me most about these examples, in the context of the rest of her story, is the power of educators and caring adults to shape a child’s outcomes. Sotomayor grew up in relative poverty, daughter of a nurse and an alcoholic father who died when she was young. On the survey of Adverse Childhood Experiences (ACEs), she would likely score at least a 3 or 4. Yet because of the adults in her life - her Catholic school teachers, her mother and grandmother, her mentors at Yale and later the district attorney’s office – she holds one of the most important positions in our country and demonstrates a high degree of social and emotional competence.

And that brought me full circle to the people we have the privilege of working with every day – YOU inspire me.  Because as you teach, play with, care for, mentor, create with, and treat the children in your world, you are literally changing the future. Who knows, maybe you’ll even influence the next justice of the Supreme Court.