Get Ready to GROW 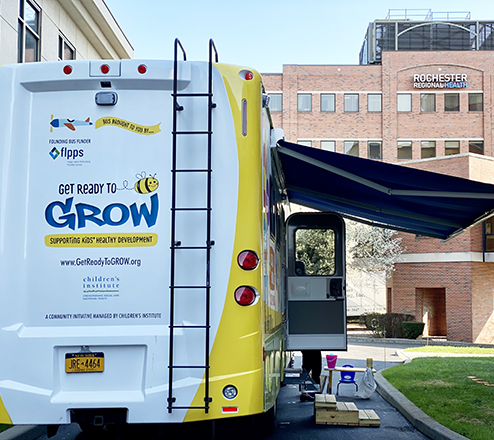 Get Ready to GROW ('GROW') screenings help you get a holistic view of a child’s developmental progress to help identify specific and actionable steps to get them back on THEIR track.

GROW helps families see past struggles and obstacles - to discover an opportunity to let their child’s greatness grow.

Become a Get Ready to GROW partnering provider!

Get Ready to GROW is not a competitor - we are your partner!

Providers and families are already seeing the impact these screenings can have on a child’s development.

Dr. Sarah Collins-McGowan, Pediatrician with Rochester Regional Health at Genesee Pediatrics and the Center for Refugee Health noted, “Get Ready to GROW screenings are more comprehensive than what I would normally be able to do in the office, and provides links to services and navigation support not typically available. It’s so easy to work with the GROW team as a provider. They figured out what our office needed and personalized processes for maximum efficiency and value.” She reflected further on the impact of GROW.  “I had a parent that was really concerned about her child being ‘labeled’. She opened up to our practice and began to trust our processes. With GROW she received quick evaluation results, talked with supportive, non-judgemental, knowledgeable specialists, and learned to move past her barriers and obtain services for her daughter, probably at least a year earlier than waiting for school screenings. This was a real success. Actually, if it was available earlier, I would have jumped at the chance to have my children checked by the GROW team.”

“My initial thought when I found out that Gabby did not pass her vision screening was worry and fear that my daughter would have damaged eye sight for life. The eye exam examination by the eye doctor helped pinpoint exactly what was wrong with Gabby's vision. I did not know that she had an astigmatism and that she needed glasses to correct it. When she wears her glasses her behavior seems to be more focused, now she does not need to sit so close to the television, and she seems more interested in school work. I am very thankful for the Early Vision Screening program. Without it my daughter's vision would not have been corrected.”

Leah* is an active three-year-old who loves preschool. Her mom reported that she sometimes did not pay attention when she was told to do something. Mom thought it was a behavior issue and that she needed to be disciplined. After being screened by GROW at her preschool, it was discovered that Leah had a potential hearing issue that needed further testing by a specialist. The doctor found the issue and Leah had tubes put in both ears. Her mom told the preschool that she had no idea that her daughter had trouble hearing and was grateful that it was diagnosed and treated quickly.

"I don't know if I could have paid for the testing, so it was great that GROW could give my son a free screening."

*Name has been changed.

If you provide care to children ages one to five years, consider partnering with Get Ready to GROW…

Connect with us to learn more and bring Get Ready to GROW screenings to your practice.

Get Ready to GROW is a collaborative…

Get Ready to GROW is a community initiative partnering across education, health, and human services.

Download it free today on iOS and Android devices in English and Spanish!

From birth to age 5, your child should reach milestones in how he or she plays, learns, speaks, acts, and moves. Photos and videos in this app illustrate each milestone and make tracking them for your child easy and fun!